It is nearly impossible to convince people that an economic ending is likely, perhaps inevitable. It is beyond anything they have seen or can imagine. I attribute that to a normalcy bias, an inherent weakness of experiential learners. For many, accepting something that has not occurred during their time on the planet is not possible. The laws of economics and mathematics may shape history but they are not controlled by history.

The form of cataclysm and its timing is indeterminable. Political decisions continue to shape both. The madmen who are responsible for the coming disaster continue to behave as if they can manage to avoid it.  Violating Einstein’s definition of insanity, they continue to apply the same poison that caused the problem. These fools believe they can manage complexities they do not understand. We are bigger fools for providing them the authority to indulge their hubris and wreak such damage.

Apocalypse In One Picture

James Quinn provided the following graph. If a picture is worth a thousand words, this graph is worth millions. The route to economic demise is depicted below: 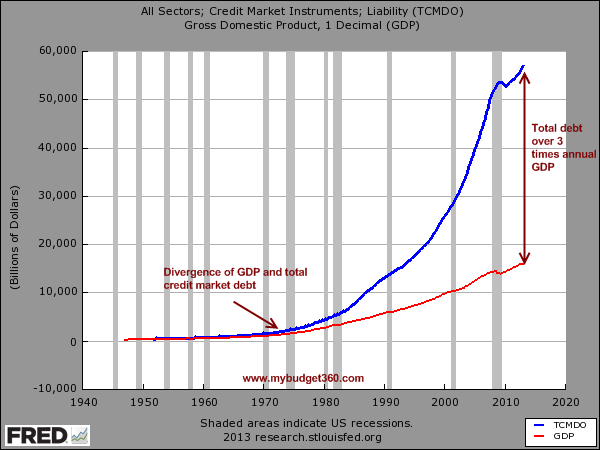 The relationships in this graph are terrifying! Debt is shown relative to GDP. GDP growth has been one-third the growth in debt for the period. That is, the economy required $3 of debt to produce $1 more in real GDP. In recent years diminishing returns to debt required $6 of debt to increase GDP a $1. Whatever the benefits of debt, they have clearly diminished, almost to zero. Debt expansion has gone exponential in order to salvage the weak growth in GDP.

To put this into a perspective the average reader can understand, think of GDP as a household’s spending. The “family” depicted above has to borrow each year in order to maintain its spending level. Imagine the condition of your family if you borrow ed 6 times the amount of incremental spending each year. Then imagine the condition of your family after forty years of continuously increasing your debt levels substantially in excess of your income.

It is impossible for a family without a printing press and a cooperative Federal Reserve to engage in such behavior. The government is different, you say? Surely it is, but not necessarily in a meaningful financial manner. Just as you would not survive such behavior, governments cannot either. History is full of examples of government collapses resulting from excessive debt and overspending. A printing press only provides the luxury of more time before the failure. 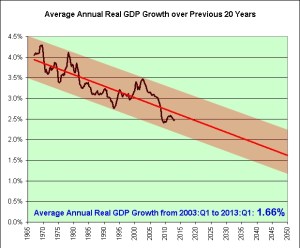 You may object that a macroeconomy is different from a family. Debt (parroting the political claim) makes an economy grow faster. The evidence shown to the right does not support this claim. Government reported GDP growth rates are shrinking as the debt expansion accelerates. Since 1965 the growth rate of the economy has been declining.

Even if you accept government GDP reporting, the chart to the right shows a trend this is pointing to an average declining standard of living. That point will be reached when the GDP growth falls below the population growth.

The US economy has been underperforming since the 1970s according to government’s statistics. That is after all the games have been played with these numbers. How much longer can these trends continue and what happens at the end? No one can reasonably answer either of these questions.

What Is Known And Not Known

Continuing to increase debt at a rate greater than GDP ensures financial collapse. Stopping or slowing down at this point likely leads to the same point. This country has maneuvered itself into a no-escape situation.

What would happen to GDP and the standard of living if borrowing were dramatically reduced? How much of the last $10 trillion in debt borrowed between 2000 and 2009 went directly into reported GDP?  Is it possible that reported GDP for this period could have been $10 trillion lower? If there is indeed a monetary/fiscal multiplier as Keynesians insist, then results would have been worse.

Answers to these questions are speculative. Those in favor of more debt argue that a calamity would have occurred had the massive rise in debt and its accompany stimulative effects not happened. For the Paul Krugmans of the world, more debt and stimulus is always the answer. All problems look like nails when you own only a hammer.

Rapidly increasing amounts of debt since 1965 have been accompanied by falling rates of growth. One may speculate what this growth would have been with different rates of debt expansion. Whether the rate of debt expansion increased or decreased the rate of real GDP is moot. Economists can use their competing paradigms to duel over this issue, but cannot come to a conclusion that is acceptable to most.

Mathematics, on the other hand, is definitive. There are mathematical limits that control the ability to service debt. Once these limits have been breached, some amount of the debt will be defaulted on. The breach point is referred to as a debt death spiral. The US has passed this mathematical point and is in a death spiral.

The political class in America, either via misguided economic policies or a deliberate attempt to hide the true condition of the country, has put us here. They will continue to employ whatever policies they believe will keep things going for a while longer. The tragic ending has been cast. Economics cannot trump mathematics.